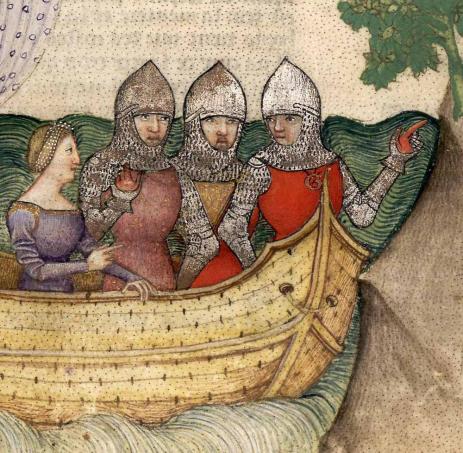 The quest for the Grail captured the interest and imagination of medieval writers no less than it has their modern successors. While each of the Grail narratives (post Chrétien de Troyes’ Perceval) amplifies material found in earlier sources, there is a particularly close relationship between the Vulgate Cycle Queste del Saint Graal (c. 1225) and Thomas Malory’s Tale of the Sankgreal (1469).

After each successfully completing a set of unique and spiritually significant aventures Galahad, Bors, and Perceval find themselves travelling together on a rudderless boat, which itself becomes a marker of their success in the quest thus far. Just after this episode, Lancelot, who the narrative leaves asleep by the water, is instructed to enter the first boat that he sees. This boat is also a rudderless boat, and his partial success in the Grail Quest is reflected by his journey in the boat and shadowed view of a Grail miracle at Corbenic. The episode that we are reading also marks one of the last aventures encountered by the successful Grail knights before they also reach Corbenic and are allowed a partial glimpse of the mysteries of the Grail.

Robert de Boron’s Joseph d’Arimathie (‘Joseph of Arimathea’) was written in verse in the late twelfth century. The text forms part of a trilogy, along with Merlin and Perceval, and it was the first Arthurian cycle to be written before the longer prose romances, such as the Lancelot-Grail cycle or the Prose Tristan. Robert’s trilogy is, sometimes, considered a tetralogy as the Perceval section ends with the Mort Artu (‘Death of Arthur’).

Joseph d’Arimathie was the first Arthurian text to account for the Christian origins of the Holy Grail. The story of Joseph of Arimathea, who rescued Christ’s body from the cross, is the primary focus of this text, which was the first text to recount, through translatio imperii, how the Grail came to Britain. After Robert had written his Grail History, the legend of Joseph of Arimathaea was popularized in romance and history, with texts such as L’estoire du Graal (‘History of the Grail’), and the interpolations in William of Malmesbury’s De antiquitate Glastonie Ecclesie (‘Ecclesiastical History of Glastonbury Abbey’) supporting this story.

The text of Joseph d’Arimathie is structured in to four parts: the prologue; Joseph of Arimathea and the Grail; Bron and the westward Migration; the epilogue. Try to keep these episode and divisions in mind as you read the text, and consider the following questions:

1. Could Joseph d’Armimathie be considered a pseudo-biblical text? Is this a revisionist reading of the Crucifixion and Resurrection in the Gospels?
2. How the story of the Fall of Man in Genesis represented in this text?
3. What is the nature of Divine revelation?
4. What is the function of relics? How are they related to miracles?
5. What is the significance of Roman authority? (Vespasian, Pilate etc)
6. Is this anti-Semitic text?
7. How is the Grail described in this text? What is the significance of the Grail Family? (i.e. the descendants of Joseph of Arimathea)