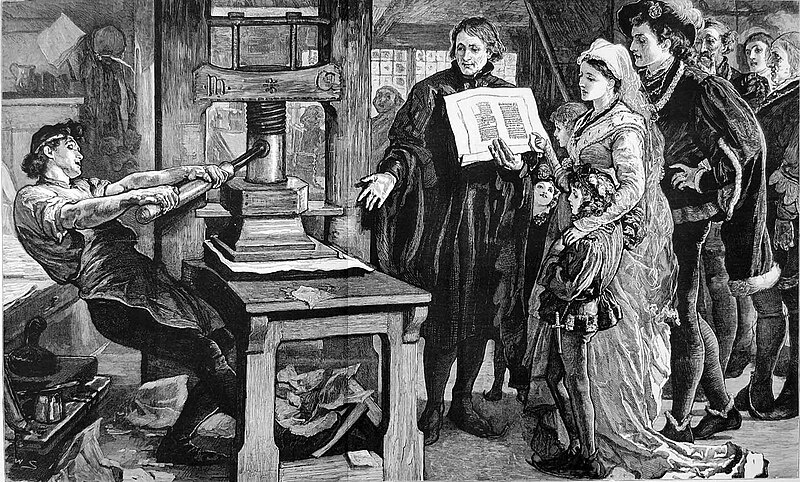 Very little of William Caxton’s early life is known, though biographers have made an effort to speculate based on the family name of Caxton (and ‘Causton’), which has connections to the Kent area. There is reference to his early life and education the prologue to Charles the Grete, where he states he is ‘bounden to praye for my fader and moders soules that in my youthe sette me to scole’, but the earliest archival evidence we have is not until after his schooling.

This first evidence we have is an entry in the 1438 annual accounts of the Mercer’s Company, who traded cloths and silks on routes between England and north-west Europe. The Company provided the means for Caxton to live and work across Europe for a considerable portion of his life, though biographers and historians (naturally) disagree on the precise dates. Caxton’s prologue to the History of Troy provides the best evidence we have for his approximate date of departure from England. It was finished in 1471 and printed c.1473, and states that he had been in ‘Braband, Flandres, Holand and Zeland’ for the best part of thirty years.

During this thirty-year gap, Caxton became a Merchant Adventurer and a relatively wealthy businessman with connections across Europe. As his wealth and renown grew, so did his involvement in international politics. Around 1462, he became Governor of the English Nation at Bruges. As a result of this role, he spent several years in Flanders, at the court of Duke Philip the Good of Burgundy, and was present at many of the trade negotiations between England and Burgundy. Caxton eventually resigned from his governorship to devote time to translating and printing. The source of his interest in this area is still speculated upon, but some of those contacts Caxton established across his mercantile career will have included printers in Cologne.

The first of his publications, the History of Troy was printed at Bruges, shortly after the translation was finished c.1471. Following this, he returned to England in the early 1470s, to begin printing in Westminster. Caxton is recorded as having paid for a year’s rent for a shop near Westminster Abbey on 30 September, 1476 – at the price of ten shillings. He continued to rent this shop each year until his death in 1491. His successor, Wynkyn de Worde, also remained in this location until he moved premises in 1500. The shopfront Caxton selected was expertly placed. The city was one of great mercantile connection, and the shop was directly between the King’s Palace of Westminster (now the Houses of Parliament) and the Abbey Church. It was a location that attracted an audience of royalty and nobility, of the Church, of the Law, and of the middle and mercantile classes alike.

The texts Caxton chooses to translate include a wide range of materials: indulgences, books of chivalry and courtesy, historical texts, and romances, the prologues to which we are examining in this session. The romances Caxton selected for translation were undoubtedly influenced by his time in the Burgundian court, and the emphasis placed by the court and Duke Philip upon the chivalric code. Many of the romances represent the fashionable views and preferred tastes of the late-fifteenth-century Burgundian court. To each of these, again following the fashion of the Burgundian court, Caxton added his own words as prologue and epilogue.

The texts we’re reading are as follows:

(1) Caxton’s prologue to Malory’s Le Morte Darthur. We are all doubtless familiar with Malory’s work. Caxton’s printing of it in July 1485 was accompanied by this prologue, emphasising Arthur’s place among the Nine Worthies. The prologue is from is P. J. C. Field’s 2013 edition.

(2) Prologue and epilogue to Charles the Grete. One of Caxton’s own translations, Charles was printed December 1485, with this prologue and epilogue. The text is in three parts, and the largest and central of these tells the story of Charlemagne’s successful crusade into Saracen Iberia.

(3) Prologue and epilogue to Godeffroy of Bologne. Also Caxton’s own translation, from French, of the history of the First Crusade as written by William, Archbishop of Tyre. The text follows Godfrey, the final of the three Christian worthies, on crusade. The Godeffroy prologue and epilogue are some of Caxton’s most explicit and enthusiastic about crusade.

(4) Prologue to Eneydos. Another of Caxton’s own translations, from a French version of the Aeneid. This prologue is not directly related to the previous three sets of texts. However, the prologue is an enjoyable read, and contains Caxton’s discussions of the English language, translation, and eggs.

(5) An article by J. R. Goodman, entitled ‘Malory and Caxton’s Chivalric Series, 1481-5’. Goodman’s article is an excellent introduction to the texts from which most of these prologues are taken. She begins with a discussion of Caxton’s life before moving on to discussion of the series of ‘Worthies’ texts (Le Morte Darthur, Charles the Grete, and Godeffroy of Bologne) and their prologues.