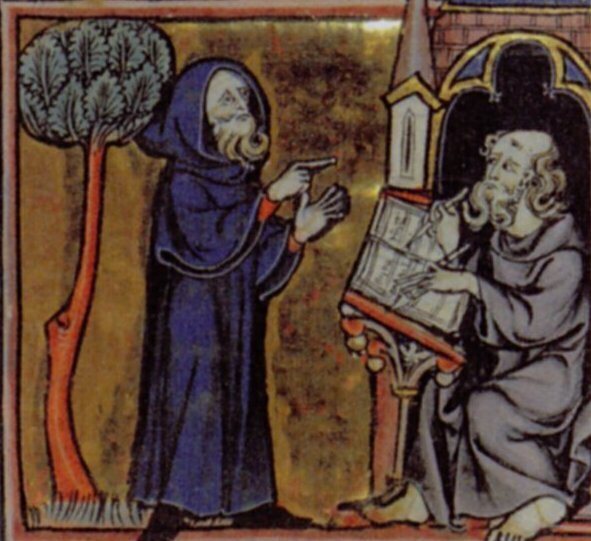 Geoffrey of Monmouth’s Vita Merlini (Life of Merlin) was written around 1150, some fourteen years after he finished his earlier – and more famous – Historia regum Britanniae (c. 1136). Geoffrey had already written the prophet once in his Prophetiae Merlini (Prophecies of Merlin), which, in addition to comprising Book Seven of the Historia, enjoyed wide independent circulation and was regularly interpolated into other texts and their marginalia.

In his Life of Merlin, Geoffrey returned to flesh out the narrative begun in his earlier text, blending the Historia’s fifth-century ‘Merlin Ambrosius’ with ‘Merlin Silvester’, a sixth-century wild-man-of-the-woods figure, to tell the story of Merlin’s life, from warrior king to prophetic madman. In the process, Geoffrey frequently builds upon, reworks and reinterprets material from his earlier Historia. Although critics have argued that the discovery of new Welsh and Scottish folkloric materials on Myrddin and Lailoken inspired Geoffrey to return to his earlier figure, there is little evidence to support this view.

In contrast to the more prosaic style of the Historia, Geoffrey’s Vita is a technically accomplished piece of narrative verse, written in elaborate Latin hexameters. While some scholars have preferred to stress the folkloric nature of the text, it is also profoundly influenced by the new learning of the twelfth-century renaissance and draws on a wide variety of textual sources and traditions, from romance to historiography; Welsh poetry to Ovidian mythology; and from Isidore of Seville’s Etymologies to Arabic astrology.

The kaleidoscopic nature of the references and allusions add to what has often been described as a frantic, frenetic text that eludes easy categorisation or definition. Just as Geoffrey’s Prophecies have been interpreted both as non-Christian and ‘legitimated by religious and biblical tradition’, the Vita has similarly been subject to conflicting and contradictory critical interpretations.[1] Neil Thomas argues that Merlin ‘reemerges, in Geoffrey’s treatment, as a saint and natural sage whose spiritual eminence acts as a magnet to another legendary saint of the early Celtic Church’;[2] Christine Chism argues that the Vita critiques the colonial emphases of the Historia by ‘explor[ing] the local, the natural and the geographically and emotionally connective’;[3] and Alan S. Montroso, drawing on modern eco-theories, has argued that the Vita ‘relate[s] the matter of British sovereignty to the problem of ecological sovereignty, or the right to capture, control, and represent the natural world’.[4] Nor is this multiplicity of readings confined to modern critics. Even in the twelfth century, the Vita was considered something of a curiosity and contemporaries, including Gerald of Wales, noted with some frustration that attempts to reconcile Merlin Ambrosius and Merlin Silvester were futile.

Whilst the Vita did not achieve the levels of popularity enjoyed by Geoffrey’s earlier texts, it nevertheless enjoyed moderate success and is extant, today, in one complete manuscript, and six thirteenth-century fragments. The continued success of the Prophecies, combined with the popularity of Robert de Boron’s Old French Merlin (c. 1200), may explain why the Vita Merlini received a somewhat limited readership and afterlife.